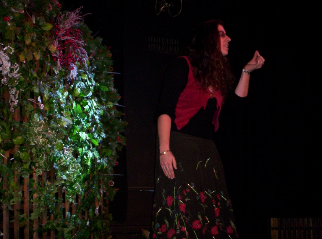 From ecobardic epics to fireside telling, whatever your requirements, Kirsty will provide an exciting storytelling experience for all ages.

Kirsty's work ranges from Bath Literature Festival commissions with Fire Springs, such as Tales from the Saxon Shores, Pilgrims of Love and Forgotten Lives, Inspiring Stories, through theatrical set piece epics such as Return to Arcadia and Robin of the Wildwood, and shows inspired by her research into British - and beyond - folk tales, such as Ghostly Tales of Gloucestershire, The Dancing Stones, The Green Girl and Greek Tales to family friendly shows at museums, attractions and historic houses such as Winter Tales, Back from the Brink and Raining Cats and Dogs.

Kirsty can work with you to design a bespoke show for your event, but also has a number of set piece shows available for hire. These can be found in the following pages: Shows: Folk Tales!, Shows: Families and Shows: Museum and Heritage Sites.

For further information and for bookings:

Why not sign up to my monthly Fire Springs and Friends newsletter to find out what's happening?