Find out my news and my musings on folklore, folk tales, writing, folk music and the Arts and Crafts Movement on my new Palace of Memory blog!

There’s always a tale behind the story...

You can find the blog here - why not follow me to keep up with my writing and events?

Here's one of the blogs to whet your appetite for more! 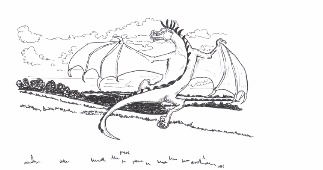 You wouldn’t expect East Anglia to be the ideal place for dragons, and indeed there are few tales in Suffolk, Norfolk or Cambridgeshire. In Essex, though, there are many tales – but this isn’t the place to discuss such creatures. If you do want to find out more, my History Press colleague Jan William’s book Essex Folk Tales has all their secrets. It seems as if the dragons have all been vanquished now, just like all the other large predators that compete with humans, but both Norfolk and Suffolk did once have dragons. Norfolk’s dragon lived in Ludham in the Norfolk Broads, but doesn’t seem to have troubled the Suffolk black. She spent her time on the county’s southern border – no doubt because of the proximity of all those Essex foes!

The story detailed in Suffolk Folk Tales brings together two fifteenth century accounts. The first comes from 1405, when Henry IV was on the throne. England was still reeling from the deposition of Richard II – and his subsequent death in prison. Owain Glyndŵr, the Welsh prince – and probably very familiar with dragons – rose up against the new king in 1400; and the Percy rebellion in the north was rumbling on. But these events didn’t affect the prosperous wool towns of Suffolk as much as a dragon arriving in their territory…

This first account comes from the Chronica Monasterii S. Albani – another example of a tale preserved by medieval monks. But this account isn’t as cut and dried as Ralph de Coggeshall. There is a bit of a mystery as to who wrote what – and when. Most people think the dragon was recorded by John de Trokelowe. It’s likely that Trokelowe was a scribe for another monk, William Rishanger. Trokelowe is a figure of some controversy as he took part in a rebellion against his mother house, St Albans, when living in the monastery’s dependent priory in Tynemouth (not very close to St Albans…) and he and the other monks were hauled back to St Albans as prisoners. Things must have been very tense in the monastery at that time, and it’s the time that’s the problem. This rebellion happened in the last years of the 13th century. Trokelowe was already a grown man – he couldn’t possibly have been writing more than a century later.

What about Rishanger? He was a chronicler at St Albans, but we know he was born around 1250. Still writing aged 150? Probably not, unless there’s a tale about St Albans that we don’t know! The Rishanger/Trokelowe chronicle was continued by Henri de Blaneforde, but he too is too early to be the writer. It seems likely that the chronicle that deals with Henry IV and Richard II was written by William Wyntershylle, another monk at the abbey described at the time as a ‘man of great learning’ by his peers. Who knows what went through his mind as he recorded the account of the dragon in far off Suffolk? Maybe he himself was a Suffolk man – or maybe this tale was the talk of the country!

This description gives us the first indications of the dragon’s appearance: ‘vast in body with crested head, teeth like a saw and tail extending to an enormous length.’ It identifies a key witness, the lord of Smallbridge Hall, Sir Richard de Waldegrave, the first of that name to live at the hall. He was 70 in 1405, and it’s possible that he, or a member of his family, span this tale to the monks at St Albans. But Sir Richard wouldn’t be there for the second sighting of the Suffolk black as he died in 1410.

The second account comes from another monastic source, and is found in the library of the Dean and Chapter of Canterbury Cathedral. It records, in brief, a battle between a black dragon and a reddish spotted dragon over ‘Sharpfight Meadow’, one, probably the black, coming from ‘Kydyndon Hill’ and the other from ‘Blacdon Hill’ in Essex. These are now known as Shalford Meadows, Kedington Hill and Ballingdon Hill – but some sources say that Kedington is really named Killingdown after the dragon fight. In the monk’s tale, the red Essex dragon gains the victory, which I must say offended my Suffolk pride, so I decided to reinterpret what had happened and put a different spin on it.

I visited all the sights of these tales, and the folk tales that embellish them – a good accounting is given on the Bures St Mary website. We – my husband, my mother and I – fortified by a coffee from a farm shop nearby set out one day last July to brave the site of the black’s lair on Kedington Hill. It was one of the few hot days of last year’s miserable summer, and the fields were cracked and scorched looking. In one, there was a fine view down to the Stour, and my Mum discovered the secret of the Suffolk dragons – underground lairs. After all, what else could have caused that cracking and scorching, after all the rain we’d had, except a dragon? 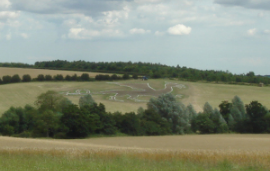 At the church, we admired the unexpected tombs of the Earls of Oxford now resting there after their journey from Earls Colne Priory in Essex. And then, when we emerged from the chapel we discovered that the Suffolk black had at last come home. For there, drawn carefully onto the hillside opposite, was a perfect dragon.

This dragon we discovered from a press cutting in the church, had been made by a local farmer – and distant descendent of Sir Richard de Waldegrave, Geoffrey Probert.

For further information and for bookings:

Why not sign up to my monthly Fire Springs and Friends newsletter to find out what's happening?